***If you are attending our weekend you should have received joining instructions in an email just after 3pm on Friday 31st January. Please check spam and junk folders if you haven’t seen them.***

Our fourth Tuneless Choir weekend will run from 7th to 9th February 2020 in Nottingham.  After ‘Britain’s Got Tuneless’ last year we’re spreading our wings further, celebrating that our bags and t-shirts have now to been taken to far flung lands by intrepid Tuneless explorers.

So the theme will be ‘PLANET TUNELESS – SHOCKING ALL OVER THE WORLD’.

For our main venue we are again using Metronome, Nottingham NG1 1AP, a music venue with its own bar and auditorium with stage.  We have booked additional spaces for the songshops including Antenna, our 2018 venue just across the road, so the Metronome bar can be a chill out area and the foyer can be for food service throughout.

The weekend runs from 6pm on Friday 7th to 1pm on Sunday 9th.

We’ve created LIMITED EDITION Tuneless T-shirts which will have the event logo on the front and a list of the locations of choirs taking part on the back – like a band’s gig list.

This evening will run from 6pm to 11pm and is designed to get everyone mingling and laughing together, so we’re all getting to know each other for the weekend ahead.

When you arrive you’ll receive a Planet Tuneless Weekend Goody Bag with all the information you’ll need to enjoy the weekend, a few treats of course, and if you’ve ordered one, your Planet Tuneless T-shirt.

LIGHT NIGHT PERFORMANCE  Friday evening is Nottingham’s Light Night, which sees artistic installations and groups performing around the city.  The theme this year is ‘Life on Earth’, so we’ll be doing a ‘Beastly Singalong’ in Trinity Square.  One of the best things about last year was seeing the massive line of people wearing fairy lights as we walked to our location.  So this year we’re formalising that into an A-weema-weh Parade.  If you want to take part then you’ll receive one of those noodle headbands with LED lights, in orange to ressemble the lion’s mane.  We’ll provide facepaints for those who want to fully embrace the lion theme.  We’ll progress from Metronome to the Market Square where we can pay homage to Nottingham’s iconic Left Lion, before making our way to our singing location.

Pizzas, salads, coleslaws and such like will be served when we return from Light Night at 8pm.

THE UNIVERSALLY CHALLENGED QUIZ will see you form teams to take part in some “activities” which will involve having to talk to other teams in order to get all the answers. Nothing too intellectually challenging… we’re here to have fun after all!  Rounds are bound to include use of the KARAOKE MACHINE which will be available to use and abuse all evening.

We’ll announce the winners at about 10.30pm, with prizes of bar tokens to enjoy over the rest of the weekend.

Arrive from 9.30am for a complimentary tea or coffee.   (More can be bought through the day from the bar. Or something stronger. If you need it.)

If you haven’t collected it on Friday, when you arrive you’ll receive a Planet Tuneless Weekend Goody Bag with all the information you’ll need to enjoy the rest of the weekend, and a few treats of course!

The BIG SING will start at 10am with us all gathered in the auditorium.  We’ll have a few formal introductions and a warm-up, before singing a few songs en masse, each led by one of our choir leaders.

We’ll then break into three 45 minute SONGSHOPS – singing sessions linked to our Planet Tuneless theme.  You’ll be able to attend any combination of three from the five choices:

We’ll break after one of the songshop sessions for a sandwich lunch.  Throughout we’ll have the now-traditional complimentary sweet/fruit table.

The songshops will finish about 2pm, and then those that want to will prepare for the FLASH MOB.  We’ll practise a little, get organised, and then walk a few minutes into the very heart of Nottingham to perform!  Street licence permitting, we’ll collect for charity.

We’ll aim to finish by 4pm so you have chance to get your glad rags on for the evening!

We’ll get underway at 7pm, with a complimentary glass of prosecco and one or two delicious canapés.

The dress code for the evening is ‘The High Seas’ allowing anything from colours of the sea, to a stripey sailor top and eye-patch, to full mermaid. Or maybe an opera singer reaching ‘The High Cs’?  There’ll be a prize for the best interpretation of the theme.

We’ll gather in the auditorium at 7.30pm for the TUNELESS AWARDS:

And maybe one or two surprises!

We’ll then launch the disco, and get ‘dancing like no one is watching’.  Be sure to drop anchor at some point to buy some tickets in the raffle in aid of Mind, the mental health charity.  You’ll be able to choose which prize(s) you want to win.

Our meal will come from warmer waters with a choice of Caribbean jerk chicken or Caribbean black-eyed peas stew with coconut rice, served over the course of an hour or so.  That will be followed by a gushing chocolate fountain, and of course the bar is open throughout for your grog!

We’ll draw the raffle towards the end of the evening.

We’ll need to walk the plank (vacate the venue) by midnight at the latest.

Sunday:  SINGALONGA ROCKETMAN with FANCY SPECS COMPETITION and if you can stay later, an optional extra BANGERS AND MASH SUNDAY LUNCH

Return to the venue at 10.30am as we blast off from planet earth with SINGALONGA ROCKETMAN at 10.45am.  This 2019 Elton John biopic may be a bit of a “fact-meets-fiction swirl” but it’s a visual and auditory treat.

You’ll be furnished with a Prop Bag with items to use at points in the film, including some special momentoes to keep.

We’ll also have a FANCY SPECS COMPETITION so bling up those glasses and sunglasses and see if you can win a prize!

The film will finish at around 1pm, marking the official end of the weekend.  If you would like some sustenance before you travel, Metronome are then offering us a BANGERS AND MASH SUNDAY LUNCH for an additional £9.50*:

Enjoy a giant Yorkshire pudding filled with your choice of buttery or sweet potato mash.  Add your choice from a selection of sausages (including vegan), a couple of vegetables, and gravy or curry sauce.

Prices include entry to the venue, entertainment and food and drinks as listed above.  Not included are accommodation costs, travel to Nottingham, transport costs within Nottingham, additional drinks, and the Bangers & Mash Sunday Lunch.

The venue is fully wheelchair accessible. Previously to access the stage avoiding steps, it was necessary to go outside. There is now a wheelchair lift up the stairs.

Feel free to email Nadine at tunelesshq@tunelesschoir.com if you have any questions about the weekend. 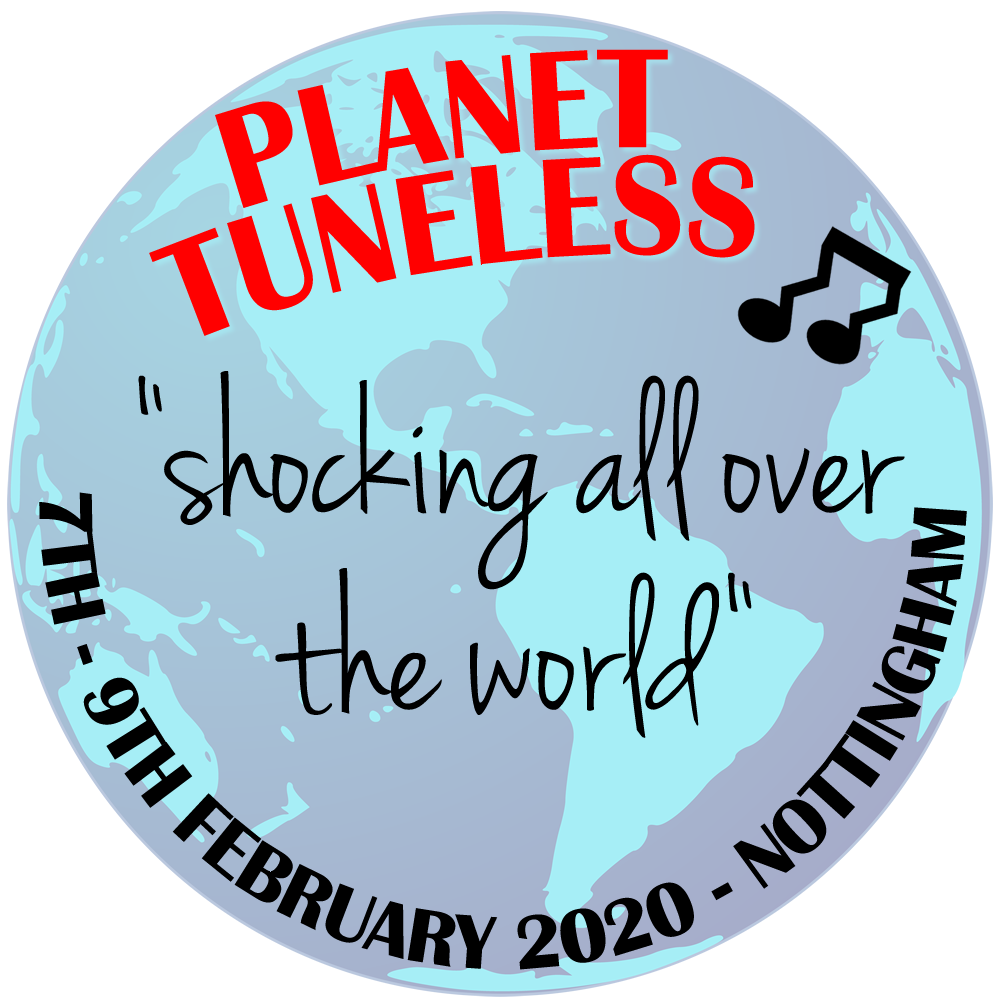 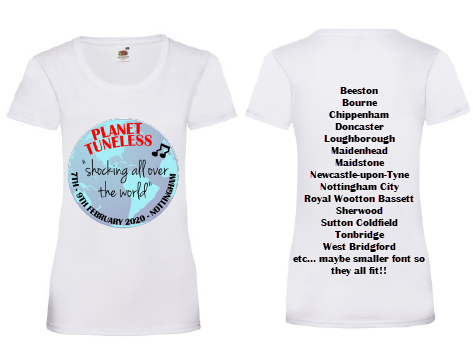 Scroll to top
XWe use cookies on our website to give you the most relevant experience by remembering your preferences and repeat visits. By clicking “Accept”, you consent to the use of ALL the cookies on our site. However, you may visit Cookie Settings to provide a controlled consent. Read MoreCookie settingsREJECTACCEPT
Cookie Policy