Stealing The Show at Splendour

You are here: Home1 / Tuneless News2 / Stealing The Show at Splendour 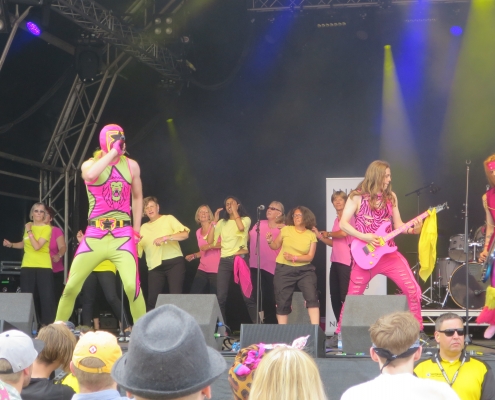 Little did most of us realise when The Tuneless Choir was founded, that their singers would being opening the Nottingham Splendour Festival with The DandyLions, on the main stage, only two years later. Yet that is exactly what happened this summer. And it is a direct result of the two essential ingredients of rock combining to make pure dynamite. Those ingredients, as all of you know, are passion and more passion.

The original premise of The Tuneless Choir was to gather together those who perhaps could not sing, but who wanted to. And the result was unparalleled – people flocked to join, and that phenomenon has been replicated all over the country. It’s not a coincidence. Singing inspires. It kindles a fire in the soul that shines through mere technique and makes music come alive.

The other ingredient lies in the world of rock. The DandyLions aim at music which you can’t just listen to. It’s not just catchy, or rhythmic; it doesn’t just have inspirational riffs which you hum on the bus. It’s way more than that. It’s music that lifts you onto your feet, so you find yourself punching the air with a primal impulse you never knew lay within you.

The stroke of genius was to combine the two.

And this resulted in the opening act of Splendour 2018. It used to be the case that the afternoon acts would be uncontroversial space-fillers, padding out the hours until the headliners would give the audience something they at least recognised, and something to applaud. And the waiting helped to give them the idea that they were getting value for money.

So we got decorative music you can hold an entire conversation over and hardly notice. You know what I’m talking about. It’s a kind of smooth pastiche that soothes and flatters the sophisticate, while barely ruffling the feathers of emotion. Not that it’s second rate in any respect. It’s highly professional, with capable musicians, pleasant voices, and acceptable songs.

And into this tried and tested commercial formula came The DandyLions.

A local band, they had nearly succeeded time and time again, causing them to go back and repeatedly rethink what they did. And they learnt. They tightened their act until the guitar strings could take more more, digging into the depths of emotion until the motherlode of rock was laid bare. Most would be content with that. But they took things further still. They reached out to those whose singing came from deep within, who looked further than the judgement of their peers, and who dared to sing from the soul.

The result was rock in its purest form.

The DandyLions made music to inspire, and the Tuneless Choir took that inspiration and gave voice to it. Combine that with a lead singer who commanded the stage, and you had pure magic that lifted the hearts of all who experienced it.

I actually pity those who arrived too late to witness history being made that day – those festival goers who, cool-boxes in hand and expectations high, strode smiling into the arena, innocently ignorant of their loss. And that includes the reporter from the local newspaper. How could they have known? Yet I know, as do all those who were fortunate to witness that half hour of gut-tightening rock.

Tuneless fundraising for Mind gets off to a flashy start!

Scroll to top
XWe use cookies on our website to give you the most relevant experience by remembering your preferences and repeat visits. By clicking “Accept”, you consent to the use of ALL the cookies on our site. However, you may visit Cookie Settings to provide a controlled consent. Read MoreCookie settingsREJECTACCEPT
Cookie Policy