Blog - Latest News
You are here: Home1 / Tuneless News2 / Tuneless fundraising for Mind gets off to a flashy start! 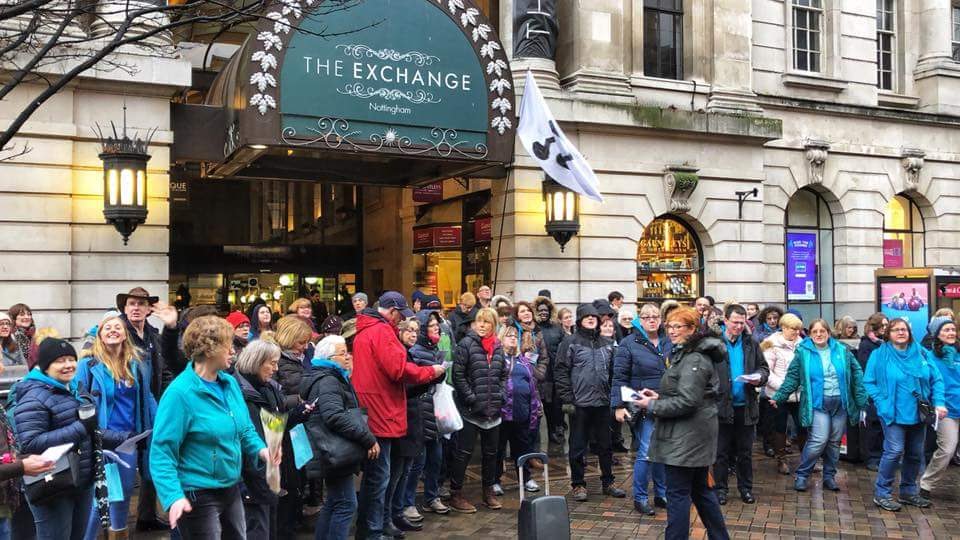 Members from Tuneless Choirs from across the country performed in a flash mob in Nottingham.

Those attending the Tuneless Choirs United weekend in Nottingham at the start of the month got this year’s fundraising off to a fantastic start.  £600 was raised for our 2018 official cause,  which is Mind, the mental health charity.

Choir members from West Bridgford, Maidenhead, Sutton Coldfield, Bourne, Maidstone, Chesterfield, Cardiff, Solent, Wallingford, Newcastle, and Beeston braved the rain to sing four songs in Nottingham’s High Street in a flash mob.  They surprised Saturday shoppers by emerging from the crowds singing Downtown, before going on to blast out Que Sera Sera, California Dreamin’ and We Are the Tuneless.  Choir Leaders Tabitha, Sheena and Mel rattled buckets and collected over £50 within a few minutes.

Over £540 was raised from a raffle held that evening with a “sparkle” theme, thanks to a wonderful range of prizes including tickets to Trent Bridge donated by Nottinghamshire County Cricket Club, an online colour consultation from My Ruby Slippers Style Academy, and 10kgs for ironing from Nicky Smuts. The latter was won by a delighted Pam Matts from West Bridgford Tuneless Choir!

Tuneless’ Nadine Cooper said “People might wonder why we bother to sing when we are not so good at it.  One of the main reasons is that it gets our endorphins, the so-called ‘happy hormones’ flowing.  Indeed singing in a group has been shown to help alleviate anxiety and depression.  So whether or not they’ve suffered from such issues, our members tend to be aware of the importance of doing things to make yourself feel good.  It is reason enough to look after our mental health. The Tuneless leaders wanted to support a charity which raises awareness of mental health issues, and provides help for those experiencing them.  In England and Wales, Mind is the natural choice.”

Maidenhead Tuneless Choir have already raised £110 for Mind from a theatre trip to see Annie, making a total of £710 that has gone to the charity within the first few weeks of the year.

Watch the video of the Flash Mob, created by Solent Tuneless Choir’s Jon Booth, below:

Stealing The Show at Splendour
Scroll to top
XWe use cookies on our website to give you the most relevant experience by remembering your preferences and repeat visits. By clicking “Accept”, you consent to the use of ALL the cookies on our site. However, you may visit Cookie Settings to provide a controlled consent. Read MoreCookie settingsREJECTACCEPT
Cookie Policy

This website uses cookies to improve your experience while you navigate through the website. Out of these cookies, the cookies that are categorized as necessary are stored on your browser as they are essential for the working of basic functionalities of the website. We also use third-party cookies that help us analyze and understand how you use this website. These cookies will be stored in your browser only with your consent. You also have the option to opt-out of these cookies. But opting out of some of these cookies may have an effect on your browsing experience.
Necessary Always Enabled
These help a website usable by enabling basic function like page navigation and access to secure areas of the website. The website cannot function properly without these cookies. PHPSESSID - this cookie is native to PHP applications. The cookie is used to store and identify a users' unique session ID for the purpose of managing user session on the website. The cookie is a session cookies and is deleted when all the browser windows are closed. viewed_cookie_policy - the cookie is set by the GDPR Cookie Consent plugin and is used to store whether or not user has consented to the use of cookies. It does not store any personal data.
Advertisement
These cookies are used to track visitors across websites. The intention is to display ads that are relevant and engaging for the individual user and thereby more valuable for publishers and third party advertisers. NID - this cookie is used to a profile based on user's interest and display personalized ads to the users. VISITOR_INFO1_LIVE - this cookie is set by Youtube. Used to track the information of the embedded YouTube videos on a website. IDE - used by Google DoubleClick and stores information about how the user uses the website and any other advertisement before visiting the website. This is used to present users with ads that are relevant to them according to the user profile.
Analytics
Analytics cookies help website owners to understand how visitors interact with websites by collecting and reporting information anonymously. GPS - this cookie is set by Youtube and registers a unique ID for tracking users based on their geographical location _ga - this cookie is installed by Google Analytics. The cookie is used to calculate visitor, session, camapign data and keep track of site usage for the site's analytics report. The cookies store information anonymously and assigns a randoly generated number to identify unique visitors. _gid - this cookie is installed by Google Analytics. The cookie is used to store information of how visitors use a website and helps in creating an analytics report of how the website is doing. The data collected including the number visitors, the source where they have come from, and the pages visited in an anonymous form.
Performance
These cookies collect information about how a visitor uses a website but they don’t collect any information that can identify the visitor. YSC - this cookie is set by Youtube and is used to track the views of embedded videos. _gat - this cookie is installed by Google Universal Analytics to throttle the request rate to limit the collection of data on high traffic sites.
Save & Accept